MegaHack v7 has been rising in popularity or in bans over the country? 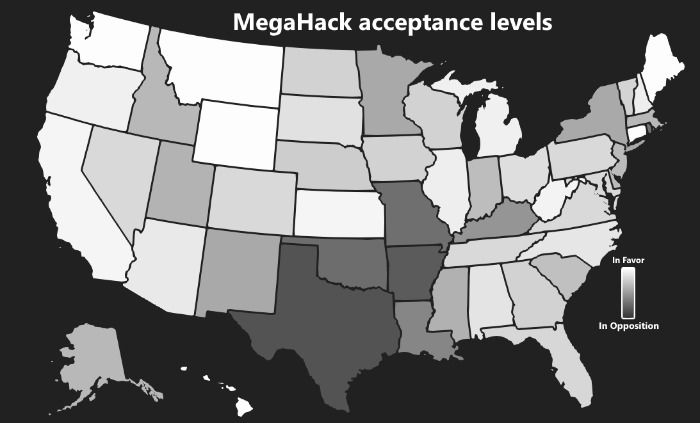 MegaHack v7 has always been a useful tool for geometry dash, but recently, studies have shown that states like Texas, Arkansas, Louisiana, Missouri, New Mexico and Oklahoma don't really support the idea of what MegaHack brings to the table, apart from Rhode Island, in which the tool was never made legal. Analyses portray Texas as the worst state in terms of acceptance where the tool is legal but restricted. This is also due to the recent 360 FPS Bypass ban (also enforced in Arkansas), restricting even more the possibilities of the tool. Missouri and Oklahoma are also on board with passing the obliged wave pulse law, which determines that the wave pulse cannot be taken off with artificial methods.

Even then, states like California, Washington, Oregon, Maine, Montana, Kansas Wyoming, Connecticut or West Virginia have been developing more laws allowing use of MegaHack, and states like Alabama or Kentucky are starting to be open-minded with the topic, even with the troubles that had with it in the past. Because of this, it cannot be determined if the future of MegaHack is gonna be bright in the country, only the time will decide.