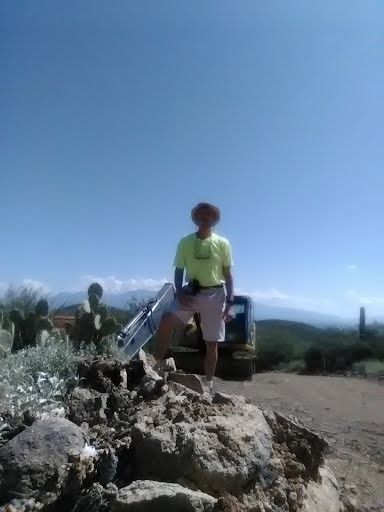 KOLD News 13, Aug 25--What can only be described as extra-ordinary, discriminating tastes by onlookers, a jogger seen in the foothills of this desert city has been 'dissed for "offending the flora and fauna around him."

That's right...his choice of exercise-wear: a pair of walking shorts; a 'neon-green' T-shirt (for safety purposes); a camouflage, desert-commando hat (for sun-block purposes); a waist pack (for water, pepper spray and cell phone); sunglasses and low-cut hiking boots round out his get-up

BUT it's been reported that his outlandish attire has been making big cacti melt where they stand; little lizards run for their lives; road runners run away; and coyotes cringe coyly behind the cacti.

Some onlookers testified the jogger was attempting to steal the Kubota excavator in the photo, that a pistol was attached to the belt-less shorts he was wearing in this accompanying photo. But others say it was not a pistol, but merely his waist pack turned frontward to access a water bottle.

Whether it was this mystery jogger's intentions to commit grand-theft auto and drive off with the excavator, or just frighten little desert-critters with his neon-green shirt, Pima County Sheriff deputies have been alerted to be on the lookout for this eccentric marauder in his eclectic outfit.

Afghanistan may have its problems, but it appears even the Arizona wildlife isn't safe in these hectic times.